After tinkering with Combat Team! close combat for what seems like an eternity, I have made some critical adjustments that seem to be working out well.

I got rid of the inherent infantry save during close combat.  (still OK for fire, mortars, artillery, small arms fire from a distance, etc).  It was really producing some off the wall results after play-testing a scenario from "Hit the Dirt" yesterday afternoon.  (I played the scenario "The Island - Stalingrad Suburbs featuring a German motorized infantry company defending a huge swath of ground against a Russian reinforced infantry battalion and tank company but using Combat Team! TO&E).

Anyways, the inherent save in close combat was screwing things up so I scrapped it during combat.  I also added a nice compromise on suppression.  For each successful hit on an enemy formation, regardless of whether the unit saves the hit or not, you make 1 suppression roll, scoring the "to hit" factor.  Each successful roll equals 1 stand from the formation is suppressed until the end of its next turn.  I tried it out in a Company assault against a German-held hilltop and it worked out nicely.  The Soviets only got about 2 or 3 stands suppressed but it scattered their movement out so that when they finally reached the hilltop, they were minus 2 sections who were trying to catch up.  I will use the suppression roll for certain calibers of heavy artillery and have them automatically suppress for each hit they score.

The German 81mm mortars suddenly because one of my most prized possessions in trying to defend this hilltop after I introduced the suppression rules - think of the blast markers in Epic Armageddon, except in this instance you have to roll to receive a blast marker, and it automatically goes away at the end of your next turn).

There is also a small table you can reference after a round of close combat that you roll against to see what happens next.  After tallying casualties, both players roll to see the impact of the fight on their formation and more importantly, who won the engagement.

So Combat Team is coming along - still.  I have to add the latest additions to the rules and QRS but for the most part, I'm pleased with the results.  In this game you have a true blending of the operational and tactical aspect of war and, in my opinion, they deliver on excitement, realism and satisfaction.  Getting all the bugs out has been part of the fun and I'm moving forward with strike and defensive values for the modern edition, which will feature more firepower among units, ATGMS, stabilization and advanced fire control in the tanks, greater lethality with the artillery, etc.

OK - onto the painting progress.  So far in the last 7 days I have completed an astounding number of British & French Napoleonic units, all based for Blackpowder and Age of Eagles but I still have a ways to go.  After rebasing and painting the total is 36 French Stands and 31 British, Portuguese and Spanish Stands so I have some work to do, (hence the heap of them drying in my garage now).  Here are the French in all their unflocked, badly painted glory! 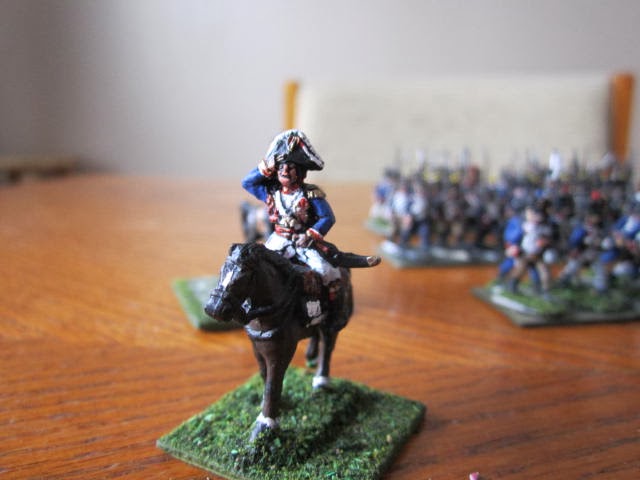 Okay onto the Israelis.  I hate to pat myself on the back, but check out the ground-work on the stands.  Sand or flock painted black and drybrushed a few different colors.  The M113s are QRF and Command Decision respectively.  They are painted rustoleum camo tan with army painter quick shade added.  It's not necessarily Israeli olive, but you get the idea.  Troops are quality castings 15mm. 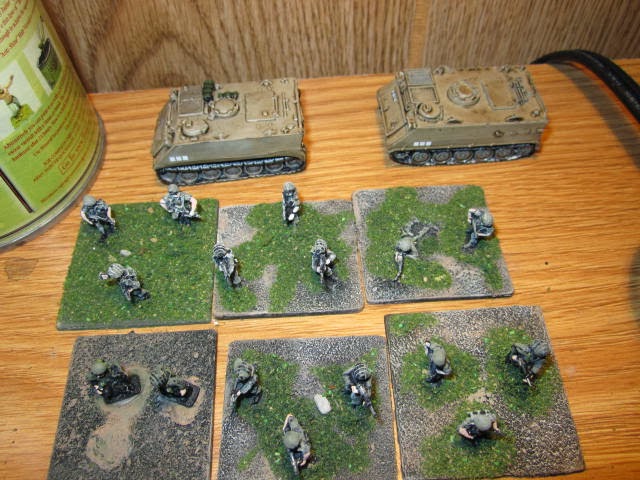 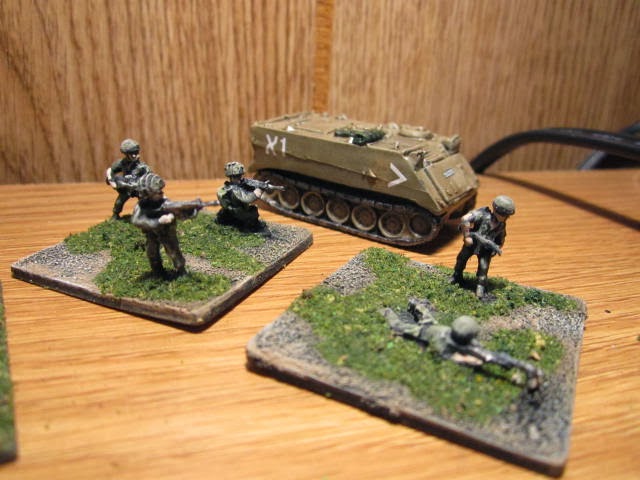 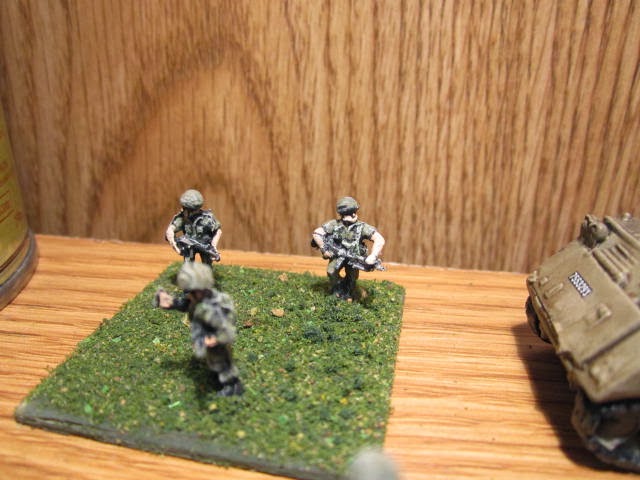 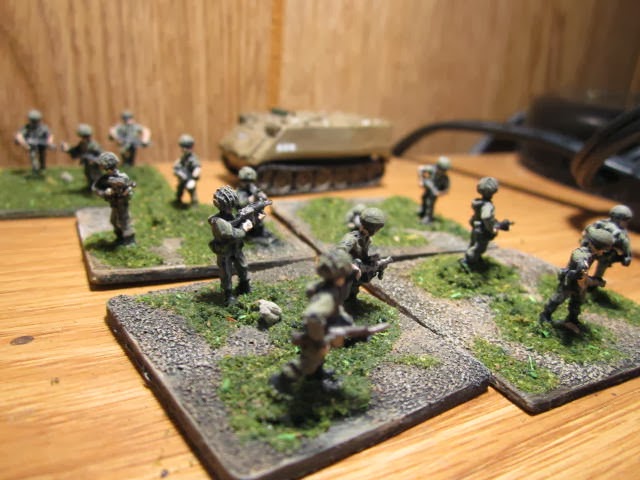 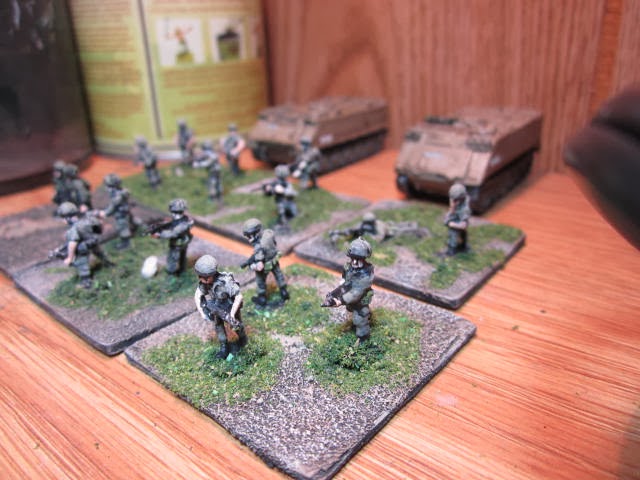 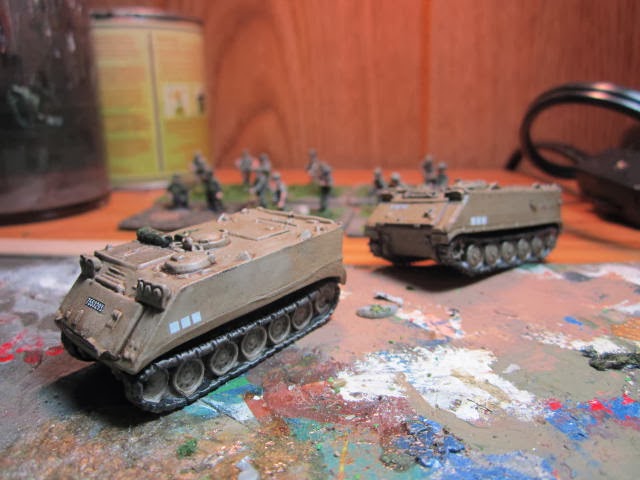 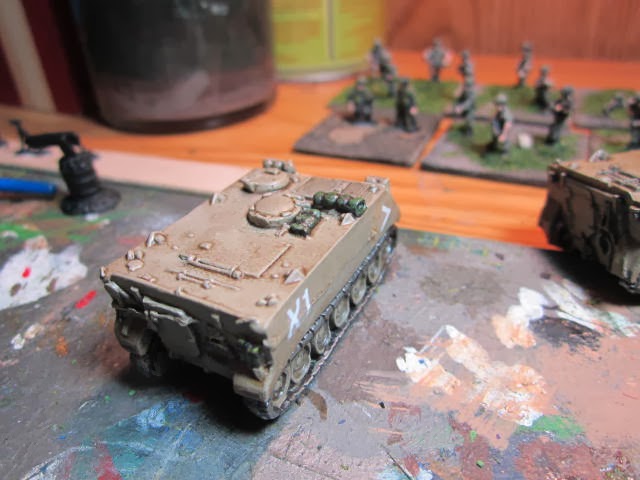 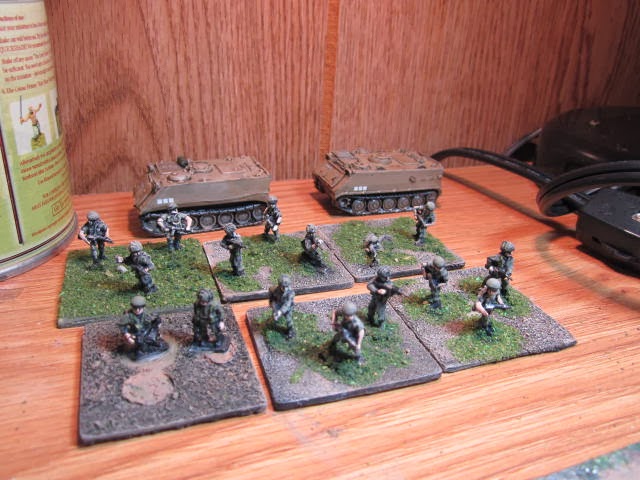 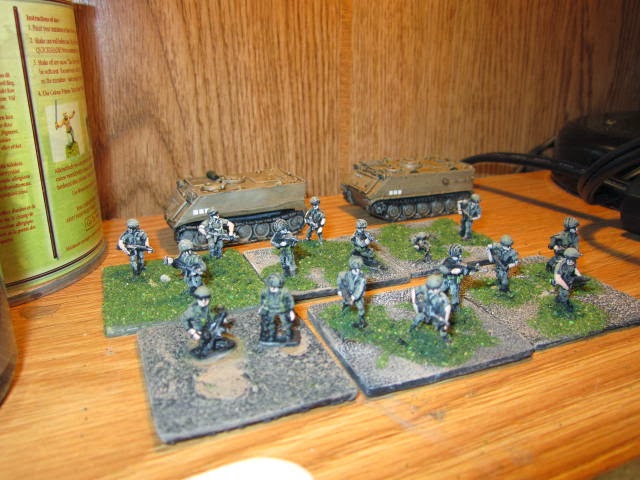 Posted by Disgruntled Fusilier at 12:20 PM